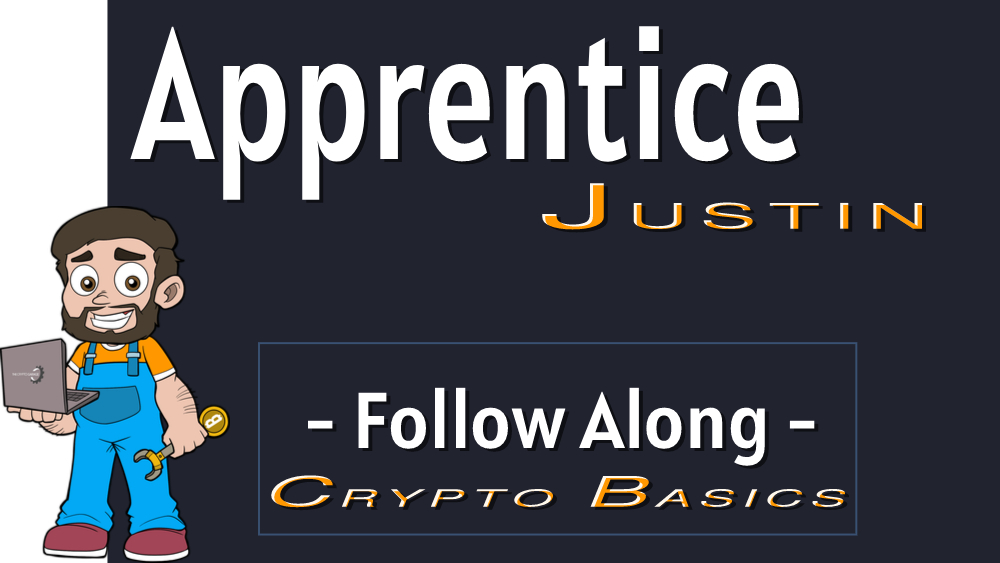 Hi everyone and welcome back to the Apprentice Justin series. Last time I left off talking about the history of cryptocurrency. Something that I thought I had a basic understanding of but I learned that there is a lot more to the cryptocurrency timeline than just Bitcoin.

Cryptocurrency actually goes back as far as 1996 when e-gold, a new form of digital payment which was backed by physical gold. This attempt ended up being shut down by the US Federal Government.

A few years later in 1998 Bit Gold, a decentralized virtual currency was launched. It never ended up getting to the final stages but it is said to be the precursor to the Bitcoin protocol.

Since its release, Bitcoin has had tremendous growth, not just in value but in the adoption of the very idea. It has created an entirely new financial system where new virtual worlds are created and it is becoming an increasingly important currency to use offline.

What exactly is Cryptocurrency?

Cryptocurrency which has now started to really breakthrough into the average human’s life is a somewhat complicated story.

The first thing to understand is the word “crypto”. Crypto in cryptocurrency is referring to the process of cryptography. Cryptography is the study and practice of hiding information.

This all boils down to the fact that the cryptocurrency process is using cryptography practices to secure your currency on the blockchain.

For a more in-depth look at blockchain technology, check out this post.

What Can I Do With Cryptocurrency?

Now that we know what the word means, let us take a look at what it can do. A cryptocurrency is a digital form of currency that allows you to buy many different goods and services both online and off.

It also offers you the ability to earn a passive income simply by holding them in your wallet or in other investment accounts. Cryptocurrency has become such an easy, safe, and secure form of payment.

The great thing about it is that you are the one in control of the cryptocurrency that you hold in your wallet. Each is identifiable to be in your ownership, not by name but by a unique identifier.

By not holding your name and by using a number identification code there is no personally identifiable information to what you hold or to its value in your wallet.

If you lose your wallet access but still have your backups you still have your money. Lose $100 in the parking lot, its gone, forever! This is one big reason for the popularity of cryptocurrencies, the other is privacy.

When you talk about cryptocurrency, it is hard not to think about Bitcoin. After all, it’s what everyone is talking about because of the immense amount of new wealth it created in a very quick fashion.

But as with most new technologies that have become popular, bitcoin has spurred the birth of a new era in cryptocurrencies. You can own coins, tokens, and NFT’s that come in more varieties than a beach has grains of sand.

During this infancy stage of cryptocurrency, new types and versions are being released every day which gives us a great many choices when it comes to owning cryptocurrency. Some are meant for holding on to and others are meant to be spent on daily activities.

As of January 2021, Investopedia reported that there were 4,000 cryptocurrencies in existence. Of those cryptocurrencies, Ethureum is the most popular, besides Bitcoin followed by Litecoin, Cardona, Polkadot, Bitcoin cash, Steller, Chainlink, Binance coin, Tether, and Monero.

The rise of cryptocurrency has spawned new ways to spend it however you like. Take Coinbase.com for example, they will offer visa debit cards that draw from the value of your crypto holdings so you can use your holdings to buy anything you can use a normal debit card to purchase.

If you are new to cryptocurrency like I am, some of the terms that I’ve come across have had me opening a new tab to do some research before I am able to continue reading. If you are wondering about crypto terms like gas, satoshi, HODL, and others this little guide to common terms found in Cryptocurrency should be helpful.

Altcoin – Altcoins are a form of cryptocurrency similar to Bitcoin but usually differentiate themselves from how the bitcoin protocol works by using the protocol as a jumping-off point to create their idea of how a coin should operate.

Hardware Wallet – Hardware wallets are devices that you can connect and disconnect from your computer. They act as a secure storage option for your cryptocurrency.

Hard Fork – A hard fork is when a currency decides to make permanent upgrades or changes to its protocol. For example, Ethereum which is currently the second-largest valued cryptocurrency next to Bitcoin recently went through the “London hard fork”. This changed how the system works.

One of the changes is to “burn” or remove all fees known as gas. generated from ether transactions from the supply. This will lower supply and increase value by having less available for ownership.

HODL – Hold on for dear life. No really, that’s what it means. This term is usually used to express the thought to not be impulsive and emotional when considering what to do with your cryptocurrency based on short-term ups and downs in value.

Satoshi – As mentioned earlier in this post, Satoshi Nakamoto is the inventor of the Bitcoin protocol. Satoshi is also the name used to refer to the smallest amount of bitcoin. For example, 0.00000001 or one hundred millionth of a single bitcoin is called a Satoshi.

Next time I’ll be learning and talking about:

Thanks for reading, you can keep up-to-date with this series and other posts by following The Crypto Garage on Twitter!